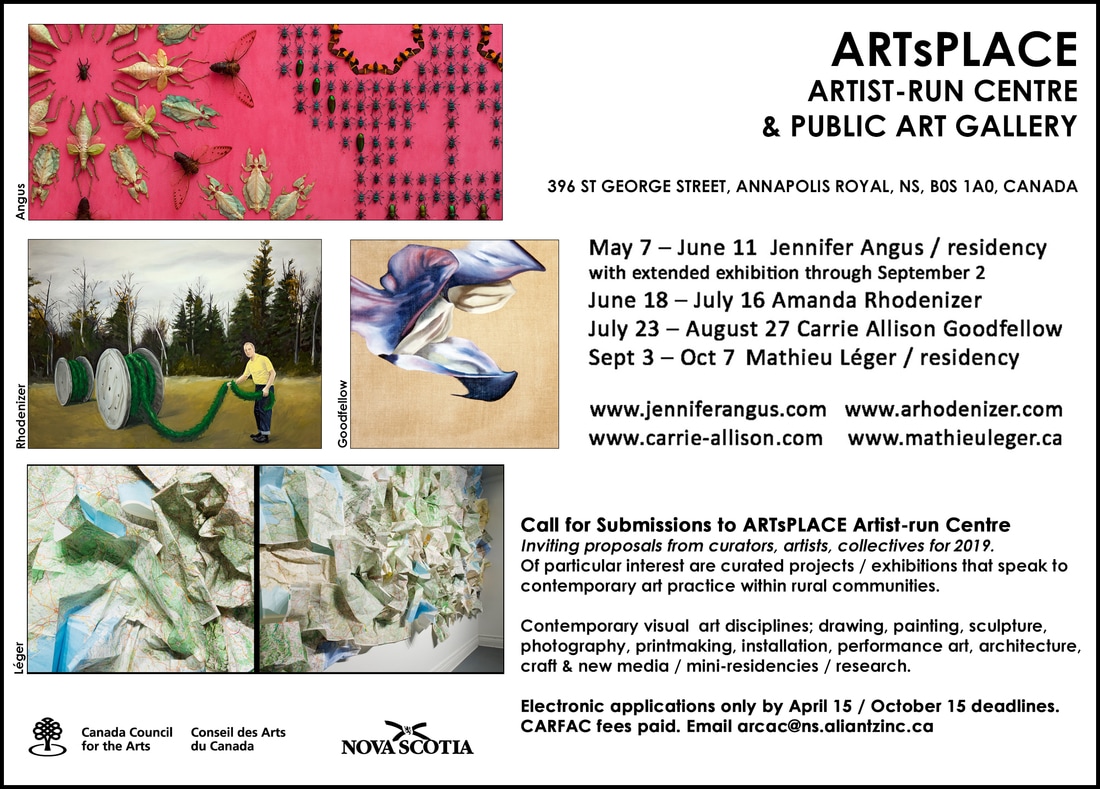 ARTsPLACE Artist-run Centre is excited to announce that Jennifer Angus will be coming to Annapolis Royal in April as Artist-in-residence. Jennifer will be working within the community and on her own practice, with an exhibition opening Sunday May 7 from 1 pm - 3 pm. Her exhibition in the main space will be on through June 11, after which a smaller installation will remain in the Library gallery through August.

Lookabout, is an exhibition that chronicles the mysterious disappearance of two young women, Anne and Victoria Oliver who were well known residents of Annapolis Royal. In 1867, they went missing.  An account of their disappearance, “The Affecting History Of Two Young Gentlewomen, Who Were Ruined By Their Excessive Attachment To The Amusements Of The Town” was published two years after they vanished.

This sensational title was in fact misleading for the young women in question were not distracted so much by urban pastimes but were actually amateur naturalists. The Oliver girls explored the town and countryside accumulating an impressive collection of local flora and insects. They supplemented these with tropical specimens sent by Anne Oliver’s godfather a well known adventurer and scientist.

The girls’ interest in the natural world was also fanned by the writing of one, Arabella Buckley, author of “The Fairyland of Science”. In the Victorian era, both adults and children were introduced to the natural world through a large number of educational publications in which insects were anthropomorphized so as to have greater appeal to the general reading public. It appears that gradually Anne and Victoria came to their own conclusion that a world of scientific facts and fairy sightings could co-exist. In this realm windowpanes with frosty patterns were the stained glass of fairies and fireflies just one of the fairies’ summer corporeal forms. On the day of their disappearance, the girls armed with butterfly nets were said to have told their mother they were going to catch fairies and were never seen again.
​
ARTsPLACE will host an authentic recreation of the Oliver girls’ collection in its main gallery. Visitors are encouraged to traverse Annapolis Royal and visit other venues where Oliver artifacts, collections and ephemera can be seen. The public is invited to speculate upon this enduring mystery. What happened to Anne and Victoria Oliver?

The Annapolis Region Community Arts Council gratefully acknowledges the support of the Province of Nova Scotia, through The Nova Scotia Department of Communities, Culture and Heritage, the Canada Council for the Arts, our membership and community.

ARTSPLACE’s vision is to share stimulating work and strengthen artistic life in our region.
​Creating environments for art and arts practitioners to thrive is key to our work, as is supporting audiences in their growth, awareness, and excitement about art.