​Visit Artist-in-Residence, Bonnie Baker, as she assembles, tests and uses drawing machines; public dates 1-4 pm, Feb 6, 13 & 20. Bonnie will be in the gallery during her residency, visitors can stop-in anytime during normal hours (Bonnie may or may not be here!).

Lauren Soloy returns to ARTsPLACE as first Member-in-Residence for 2019
Lauren recently signed a two-book contract with Tundra Books (a division of Penguin Random House Canada) to write and illustrate two picture books, and will be using the residency to work on the final art for the first book. Her illustration process uses mixed media - often combining cut paper collage with pencil crayon, pastel, and watercolour. She says, “When making art for kids,
it’s a balance between keeping everything consistent and coherent, and also keeping it loose and playful.”

As part of the residency, she will be offering open studio hours every Friday, from 10 am to 2 pm.
​To see more of Lauren’s work, you can visit her at: www.laurensoloy.com

still/life exhibition, to June 16. The exhibition will include a 4-week residency in the gallery space itself where the artist will continue to make daily drawings of objects brought by members of the public.

​Deirdre Dwyer has been writing poetry since her teacher taught her about haiku in grade six. In the meantime, she's worked as an English as a Second Language teacher in Tokyo, a Creative Writing instructor in Halifax, a Sessional Instructor of English in Windsor and a bookseller. Deirdre holds an MA in English and Creative Writing from the University of Windsor, and was a founding member of the Bourbon Street Poetry Society. She has worked with the Hope for Wildlife Society, a wildlife rehabilitation facility on the Eastern Shore. Deirdre was also Coordinator of the Musquodoboit Harbour Farmers' Market, now in its fifth season. She is presently chair of the Musquodoboit Harbour and Area Community Association, and has recently been writing prose about her three years in Japan and her subsequent travels.

As part of the residency, Deirdre will present a public readings and open studio hours. 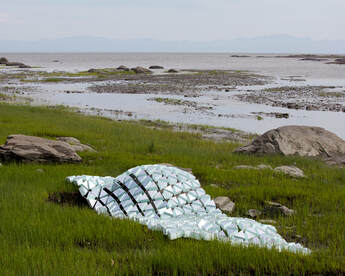 The installations, sculptures and videos the artist will make while doing this project are having, as a starting point, an assembly of equilateral triangles, comparable to the grids of the 3D modeling software. By reproducing this grid in an artisanal way, her goal is to take a look at the technologies invented to analyze the movements of water.

The general idea of the project is to transpose the imagery taken from digital technologies to the real world in order to submit it to the forces of nature. The image thus takes on a material form, making it vulnerable. The assembly can be agitated by the water and break apart. It may eventually dismantle itself, rather than always resume its perfect shape as the grid we can see on the computer screen.

​Artistic statement + bio
CAMILLE BERNARD-GRAVEL
Since getting her BA in 2014, Camille Bernard-Gravel artworks have evolved through the cities, unfolding on three continents including South America. Devoted to a multidisciplinary artistic practice, she is interested in interrelating natural particularities and various technologies invented by humans.

Hailing from Quebec City, her sculptures, videos and installations have been shown in solo exhibitions in various Canadian cities and in La Plata, Argentina. Her works were also presented in collective exhibitions in Quebec, France, Thailand, Mexico and in the United States. She took part in many international events such as Quebec Digital Art in New York (2015), the Montreal Digital art Biennal (2016), in the International contemporary art Symposium of Baie-Saint-Paul (2016) and Mois Multi in Québec (2018). 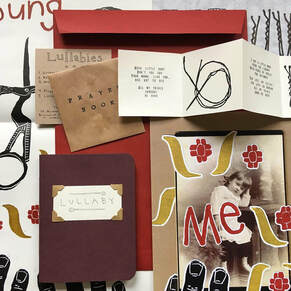 The exhibition will display the artifacts of an international Mail Exchange project which I have operated since May 2014 and which remains ongoing. The project functions like the publication of a quarterly periodical. However, instead of a traditional publication, I produce editions of parcels, collections of handmade, printed objects. These objects are intended to be approachable, intimate, and playful, often made borrowing formats from the domestic realm or from childhood, including posters, paper dolls, zines, mixed CDs, bunting, and badges. Parcels are produced through drawing, printmaking and embroidery, and despite the use of electronic forms of reproduction, like photocopying, in addition to more traditional ones, like silkscreen, each is made by hand and intensely time-invested. Participants interested in receiving a parcel subscribe by sending me something of their choice for exchange. Participation is open to anyone and items sent for exchange are entirely the choice of the senders. The Mail Exchange project has so far manifested as 10 installments, with more than 200 parcels sent to over 25 countries.

The exhibition will present the Mail Exchange project in a semi-museological way, as a record of events that have taken place outside of the gallery. One copy of each recent installment will be hung on the walls for viewing, but as this work was designed to be touched and read, additional copies will be available to be handled. Mail I have received for exchange will also be displayed, demonstrating the range of work and the often incredible level of care that participants invest in sending gifts to a stranger. Visitors will be able to trace correspondences and witness how, in some cases, the relationship ceases to be that of strangers. The exhibition will include a series of silkscreen-printed and embroidered maps which roughly document the distances mail travels with each installment and the web of connections that is formed. Additionally, one corner of the gallery space will be furnished with a postbox and a small chair and writing desk equipped with drawing materials. Visitors will be invited to use these materials in order to correspond with me throughout the exhibition, allowing me to be actively engaged with the audience despite my distance.

Laura Watson is an artist and writer currently living in Kitchener, ON. She acquired her BFA from Mount Allison University in 2015 and has spent her time since making zines, prints, and embroideries for her free, international Mail Exchange project.
WEBSITE: www.laurakwatson.com
INSTAGRAM: @laura.k.watson

ARTSPLACE’s vision is to share stimulating work and strengthen artistic life in our region.
​Creating environments for art and arts practitioners to thrive is key to our work, as is supporting audiences in their growth, awareness, and excitement about art.